Drag racing is one of the oldest forms of motorsports activities. Mechanics, engineers, and drivers…

In 2004, Cadillac unveiled a high-performance version of their already potent CTS sedan, the CTS-V. Just like the parent model introduced a year before, the CTS-V offered a single 4-door sedan body style, though it came with a more powerful V8 engine – the same as the one employed by the Chevy Corvette. For the first two years, it was a 5.7 L V8 good for 400 hp that worked in pair with a 6-speed manual using gear ratios from the Corvette Z06. Starting with 2006, the Cadillac CTS-V received a larger 6.0 L V8 also used by the Vette – it delivered the same power and torque outputs as the previous engine but thanks to a larger displacement, its torque band was wider.

Because of a larger power mill and higher performance compared to the base CTS sedan, the model also received some other upgrades. It came with larger shocks and anti-roll bars and much increased spring rate. A track-ready suspension, 6-lug hubs, 4-piston calipers by Brembo, and run-flat tires were also there. Together, they resulted in 4.6 seconds of 0-60 mph time and quarter-mile time of 13.1 seconds, while the top speed was stated at 163 mph. The first-gen CTS-V was in production up to 2007.

The second generation of the high-performance CTS entered the market for the 2009 model year, again a year later than the base variant. And again, the CTS-V utilized most of the bodywork and components of the base version, though there were some upgrades. This time, the model was offered in three body styles – apart from sedan, coupe and station wagon options were available too, though the latter was launched in 2010 and a coupe variant entered the market a year later.

All versions utilized a supercharged 6.2 L V8 power plant based on the engine of the Corvette ZR1 that was capable of generating 556 hp. Two gearboxes were offered – manual and automatic, both with 6 speeds. As for upgrades compared to the base CTS, they included coil springs on both ends, specially adjusted dampers, enlarged front brakes, hydraulic-assist rack-and-pinion steering sensitive to speed changes, and 19” wheels. The 0-60 mph time was now 3.9 seconds, while a quarter mile time was improved to 12 seconds flat.

Despite incredible performance characteristics and lots of luxury features, the production run of the third-generation CTS-V was short and included only three years. The model debuted in 2016 and turned out to become the fastest Cadillac to be produced at the time.

“What It Is: Cadillac’s most ferocious performance sedan, essentially a four-door Corvette Z06. The CTS-V uses a 640-hp version of General Motors’ LT4, a supercharged and intercooled 6.2-liter V-8, paired with an eight-speed automatic that routes torque exclusively to the rear wheels” – CAR&DRIVER.

Available as a sedan only, it employed a supercharged 6.2 L V8 churning out 640 hp, again borrowed from a Corvette, this time the Z06 version of a seven-gen model. It worked in pair with an 8-speed automatic only and could accelerate the CTS-V to 60 mph in 3.5 seconds. The maximum speed of the vehicle equals to 200 mph. Just like the base version, the Cadillac CTS-V was discontinued after the 2019 model year. It should be succeeded by the CT5 sedan that most likely will also offer a high-performance CT5-V version. 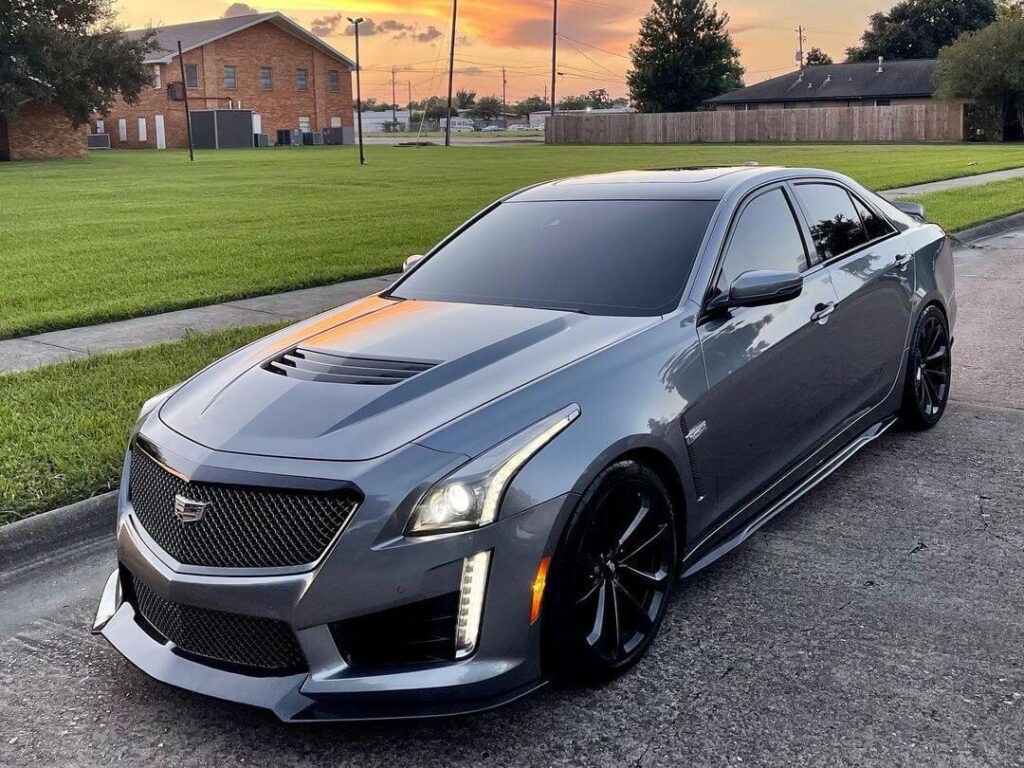 Why modify your Cadillac CTS-V?

Whatever version of the Cadillac CTS-V you own, it surely delivers at least solid performance and looks excellent from the factory. But there is always room for improvement – either to push performance even further, add some personal touch or increase the level of comfort. Especially, if you own some rare version, you can make it totally unique. Three main types of modifications are performance, exterior and interior upgrades. As the name implies, performance ones will help you push your CTS-V to the limits, exterior mods will make it look special, while exterior upgrades will add comfort and convenience to your regular driving.

Simply speaking, performance modifications are aimed to make your car faster or more powerful. They mainly include engine tuning but can also affect other systems of your CTS-V. Today, the range of upgrades you can do is virtually countless, from almost invisible from the outside performance chips up to installing a more robust turbo or supercharger. You can make your vehicle run faster, deliver more revs, respond faster and more accurately, sound louder, and much more. The range of mods is huge, but take a look at some of the most common ones.